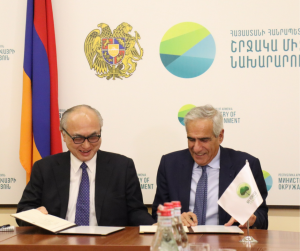 On December 15, at the Ministry of Environment, we signed a grant allocation agreement with the Embassy of Japan in Armenia. Gayane Gabrielyan, the Deputy Minister of the Environment; Masanori Fukushima, Ambassador Extraordinary and Plenipotentiary of Japan to Armenia; Andre Gumuchdjian, the founder and director of My Forest Armenia, and Vladimir Kirakosyan, the director of Armenian Forest Committee, were present at the signing ceremony of the contract.

At the beginning of this year, the Embassy of Japan in Armenia announced the Human Security « Grassroots » Grant Program (GGP) in the amount of up to 10.000.000 Japanese yen. Our grant, the purpose of which is to build a greenhouse on the territory of the Benjamin Gumuchdjian Nursery in Gugark, Lori Province, as well as to cover a part of the nursery with an anti-hail net, amounts to 35․515․000 AMD.

So, next year we will build a 506 square meter forest seedling greenhouse, which will enable us to grow an additional 115․200 forest tree species seedlings with a closed root system per year․ We will also install an anti-hail net on the 6.600 square meter area of the nursery, which will improve the efficiency of the nursery and the open root system, as the seedlings that are most sensitive to weather conditions will be protected.